Friday, December 23, 2016.  Full after eating Jackson Hole, I was rolled to the North corner of the 10th floor (Room 214) late in the evening on Sunday, May 1, 2016.   [I would ultimately stay here for 12 days.]   As I was wheeled to my room, with a few good friends in tow carrying my current belongings, we got to see most of the 10th floor “oncology wing.”   A few patients were out and about, but it was generally quiet.   There was no doubt this was totally different from the 14th floor (which, again, was not “real.”).   This was real.   Everyone here had cancer.  [And that became more and more apparent as the days went by.]   There was coughing and wheezing as I was rolled past the rooms, and I saw nurses’ aides walking in an out with medications and blood pressure checks.   I thought and said out loud that “sh&t just got real.”

At that point we made it to my room tucked away in the corner right next to a patient/guest lounge area with couches and a television.   The room was huge.   Couches and tables, lots of chairs, good nightstand, large closet, decent bathroom and a little “work station” where I could set up my laptop.   After my friends took off, I started getting myself organized (something I do wherever I go, whether it be a hotel, my home or the office).   The next morning Jen and my Mom started stocking me with new sweat pants (I had only had a pair or two before all of this) and some t-shirts to wear around the room (everyone was sick of my Lehigh and Cornell t-shirts, which I have been wearing every weekend for 15 years (and still do)).   We had friends send and bring me blankets and slippers [I am wearing the same slippers as I type this.]  If I was going to be here for 3ish weeks, I was going to try to get comfortable and make the most of it.  And that is exactly what I did. 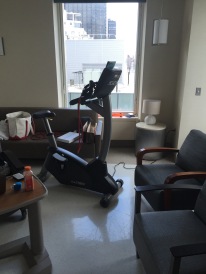 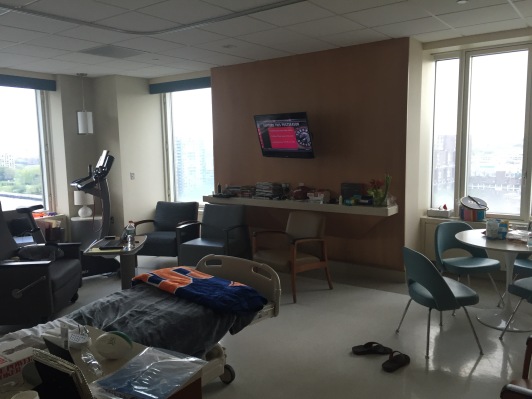 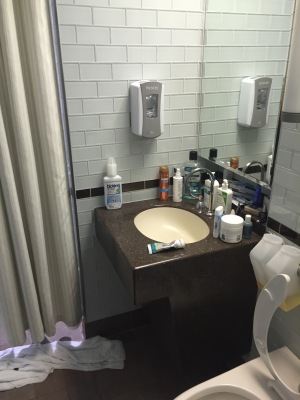 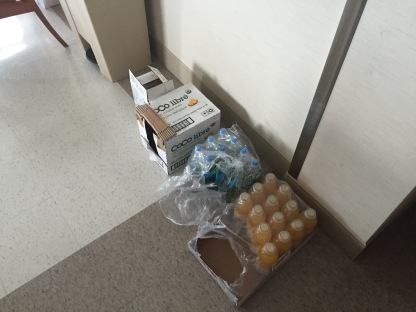 I made myself at home.   Jen ordered me lots of drinks to stay hydrated (some good, some bad).   I kept food in the fridge.  I ate meals at the kitchen table.   I had a recliner chair with an effective desk where I would sit for hours in the middle of the night reading and responding to emails.  The hospital brought me an exercise bike because I was tired of doing laps in the hall after a few days (there were signs everywhere that said “Walk to Health,” so I walked in the morning, mid-day and at night as I felt good most of the time).   People on the floor knew it was time for my walk and I made sure to say hello to people as I walked by.  [One guy that was changing bed sheets (I had said hello to before) stopped me in the middle of my walk on the second or third night, and said he wanted to ask me an inappropriate question.  I said no problem (although I wasn’t sure what was coming).   He asked me what I was doing at the hospital.   He said I didn’t look sick at all.   At that point I told him I didn’t feel sick either, but I explained the situation.  We spoke a bunch over the next couple of weeks, including about some ideas he had to start a business (I listened more than talked).]

I met a bunch of other patients on the morning and afternoon walks too (each person had some type of leukemia or lymphoma and everyone was in the hospital either at the beginning of their treatments or because they needed a serious procedure; and not everyone was in good spirits). [I actually ran into two people on Wednesday in the infusion center that I had met and become friendly with in early May.  One was doing OK (he had a stem cell transplant but no chemo), but he is still unable to work because of low white blood counts.   The other guy was not doing great and was starting on a new trial to see if something different would work.   Good reminder that each person’s cancer is different.]

Other than a few hiccups over the course of 12 days (described below), my nearly two weeks on the 10th floor will be remembered for the steady stream of visitors and outpouring of support from so many people in different places.   All of which made me think much less about being in the hospital and the suggested six months of treatments ahead.  It was all still raw and not totally real, but I certainly felt like my life had flashed in front of my eyes just a week before.  [Strange to be writing this now, eight months later, with my head intact and in a position to be back on my feet in 2017 and beyond.]  And, of course, I missed my kids (and Jen) and not living at home.  We did a bunch of “strategic” face times, always when I was feeling great.  But never a replacement for being home.

Truth be told, by the end of my stay on the 10th floor (which was extended because I ran a fever), I was so comfortable that I told Jen and my Dr.’s team that I was worried/nervous about going home too early (it was my first time being neutropenic and I had to get injections before I left).  Which frankly scared me a little as I was incredibly conflicted.  The doctors pushed me, however, and we went home on Friday, May 13, 2016 — just 16 days after being admitted to the hospital.   When we left, I felt good and had all sorts of plans (together with a bunch of promises, many of which were broken) to enjoy the summer.   [We obviously did not appreciate that the “protocol” would run through December 21.   And I was feeling good with minimal side effects, so dI did not embrace that it would get worse than the “induction” phase.  Not a big deal at the end of the day and I would take the same results 10/10 times, I’m just calling balls and strikes…]

What follows are some of the highlights of my 12 days on the 10th floor at NY Presbyterian in May 2016.  The visits, emails, texts and phone calls from family, friends, partners and colleagues will define those 16 days in the hospital (and these eight months more generally) much more than the mouth sores, horrible constipation from mediation (that required attention from the doctors and then the nurses!) or my first spinal tap.  And while I can’t sit here and thank each and everyone person that got in touch or came to visit, I feel like I remember and do not plan to forget, each call, e-mail, text and visit.   We are incredibly appreciative for the outreach and support because that was what this all
was  — not the cancer.